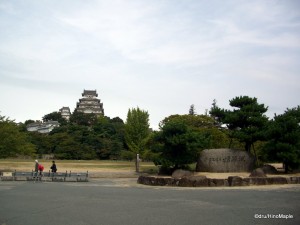 Himeji from the park entrance.

On September 26, I ventured down to Hyogo to see the famous Himeji-jo.  It is famous for being one of, if not the only, true Japanese castle in Japan.  Most castles in Japan have been restored, or rebuilt as they were destroyed in the war.  Hiroshima-jo looks very beautiful, however once you step inside, you are greeted with a modern concrete museum.  Osaka-jo was also rebuilt and has a very strange glass elevator that takes you from a lower level to the entrance of the castle.  Looking at public pictures of the castle, it looks very out of place for a “heritage” site.  Thankfully, Himeji was lucky to be bombed only twice still retains most it’s the original architecture.

Himeji city is a very small city.  It is located roughly one and a half hours by express train from Osaka, or 40 minutes by Shinkansen.   There are only 2 things to do within Himeji itself.  The most popular is to go to Himeji-jo, and the second is to go to Shoshazan (Mount Shosha).  The latter is famous for being the filming spot for the Last Samurai staring Tom Cruise.  Unfortunately, I spent too much time in Himeji-jo to go to Shoshazan.  Spending the night in Himeji is not necessary unless you spend almost the entire day there.  It’s better to spend the night in Kobe, or Osaka instead and leave Himeji as a day trip. 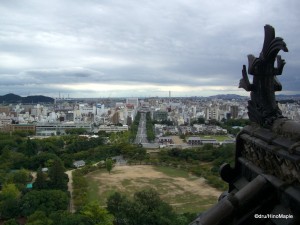 View from the top of the castle

As mentioned, the main attraction of Himeji is Himeji-jo.  It’s a very beautiful place and it costs 600 Yen to enter, but the fee is worth it.  You start off walking up a small hill and then you have a choice of directions.  Himeji castle is built to be confusing and maze-like.  As you approach the main castle, you have to travel in a generally spiral direction.  Head left and you’ll be taken to the “women’s quartres”.  You will be granted a taste of how people might have lived when it was a real functioning castle.  As you continue to access the castle itself, you will be given views of various courtyards and water wells before reaching the main courtyard in front of the castle.  Within the castle itself, you’ll find it cooler and bigger than expected.  The design tends to make you think it’s smaller than it really is.  Inside, you’ll be able to see some representations of Samurai armour, various weapons, and several gun racks.  Aside from the hike up the castle, there isn’t too much to see, but the experience is more important.  There are various places to go and look outside.  Once at the top, you’ll be greeted by many people who are just checking the view and looking around.  There really isn’t much to see, but it’s a must do.  The way up, you will use the original stairs, but going down, I believe they made new stairs to relieve pressure from all the people who visit the castle.  Upon exiting the castle, there is a few ways to return to the station.  The main route will take you to the Harakiri courtyard.  It is the main place where people killed themselves.  The story of how it came to be is unknown, and there was still blood on the walls until 50 years ago.