On October 12th, 2008, Japan hosted the 16th round of the FIA F1 World Championship.  The pinnacle of four wheel motorsports has been coming to Japan for decades.  Since 2007, the Japanese GP has been run at Fuji Speedway in Shizuoka.  Before 2007, the F1 Championship had been going to Suzuka in Mie Prefecture.  A few hours away by Shinkansen.  In 2006, Toyota had more money than Honda, so F1 decided to move from Suzuka to Fuji. 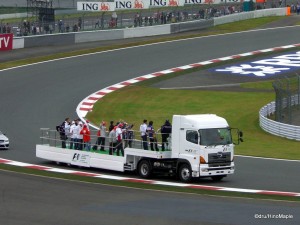 Fuji Speedway is nestled at the base of Mt. Fuji in Shizuoka.  It’s a beautiful circuit that has a 1.5 km straight and various corners.  It has been full of controversy as many drivers dislike the course.  It tends to rain often and it’s difficult to see Mt. Fuji at anytime.  While Fuji Speedway is located very close to Tokyo, it was a nightmare to go and return from the Speedway last year.  It took over 3 hours to just leave the circuit!  I must say that I was worried about the wait to leave the Speedway, however, things ran extremely smoothly.  There was hardly any problems.  Following last year, the organizers decided to try to fix things, and the changes worked.  While I had to walk a long distance to reach my shuttle bus, the lineup was only 5 minutes and I reached Gotenba Station very quickly.  So quickly, that by the time I returned to Tokyo this year, I was still waiting for the shuttle bus, last year!  Needless to say, I was very happy. 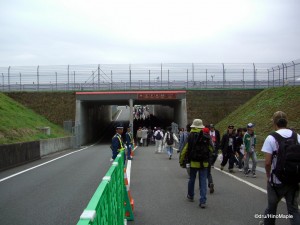 I have never been to the Canadian Grand Prix, but as you should know, I have been to Japan’s Moto GP race.  Comparing the two, I still love Moto GP, and the feeling of both events is completely different.  Moto GP attracts more international faces, and more hardcore fans.  F1 brings more of the everyday people.  It’s hard to explain the differences, but just imagine the differences between the downtown core of any city with one of the suburbs.  Moto GP is like a suburb.  Everyone is roughly from the same type of family, whereas F1 brings people from all walks of life.  The amount of good available for purchase at the F1 race was astonishing.  There are more items, but unless you are a true fan, there isn’t too much that is worthwhile.  To the average fan, namely me, I wasn’t going to buy a Ferrari shirt, or a Renault shirt either.  Prices were very expensive and the products were generally useless outside F1.  I don’t know too many people who wear complete F1 race suits (each costs over 500,000 Yen) or even a shirt that is full of Toyota logos.  As nice as some of the clothes and goods were, I just couldn’t buy any of it.  However, that never stopped the thousands of other fans from buying as much as they could. 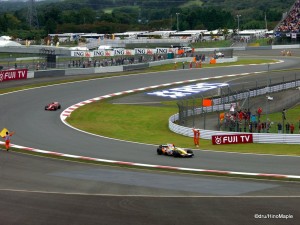 The race itself was fairly exciting.  Right at the first corner, there was an incident involving the top driver, Lewis Hamilton.  By the end of the 6th lap, things had finally settled down a little.  Like all of F1, passing tends to be infrequent and at the beginning of the race.  After 10 laps of any race, things get boring.  The only excitement occurs when there is a blown engine or an accident in the pits.  Other than that, not much happens.  I must say that Fuji Speedway is better than most tracks on the F1 calender.  Passing occurred during the entire race, although not so often as Moto GP.  😉  In the end, after a very eventful opening to the race, Fernando Alonso, driving a Renault, won the race.  After the cooldown lap, I grabbed my stuff and ran like the wind.  I had to beat the crowd so I could get home somewhat on time.

After the first year of hiccups at the first Fuji Speedway Grand Prix, the second year was 10 times better.  While the price of a ticket is reallye expensive, it’s worth it to go at least once in your life.  Hopefully next year, at Suzuka, there will be more free swag and a more exciting atmosphere.  I’ll let you if I do get tickets to go.

2008 Fuji Television Japanese Grand Prix is part of a series of posts detailing my experiences of visiting various F1 races around the world.  To read more about the various races I have attended, please follow the links below: