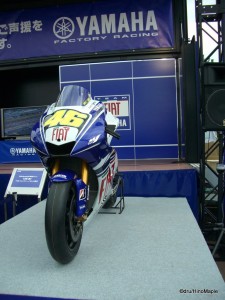 September 28 marked the 2008 A-style Grand Prix of Japan.  The A-style Grand Prix of Japan is the Japanese round of Moto GP.  Moto GP is the premier league of motorcycle racing, equivalent to F1.  This championship is, in my opinion, much better than F1.  There is a lot of passing, and lots of excitement.  Going to a true Grand Prix, you’ll be entertained with 3 different races and 3 different racers.  There are 3 classes in Moto GP.  125cc, 250cc, and MotoGP Class.  The 125s are the entry level for world class.  Riders can be as young as 15 to a maximum age of 28.  This is to promote younger talent to rise through the classes.  Generally, good riders will start in 125, move to 250, and finally graduate to the MotoGP class.  It is very difficult as each class gets smaller and smaller. Going to a MotoGP race is an adventure in itself.  The race is held in Motegi, Tochigi Prefecture, about 3 hours North of Tokyo.  The track is nestled within the surrounding hills and mountains and it provides a good change in elevation.  However, the track can be a little boring.  Rather than have nice fast sweeping corners that allow motorcycles to pass, it’s a stop and go track that is better suited to F1.   While it isn’t the best track for motorcycles, it is still a great place to go.  I have been to 2 previous Grand Prix of Japan and I must say, this year was the best.  Previously, it took a long time to get to the track and a longer time to get home.  We got to the GP very quickly (almost record time) and returned home after the race in record time.  If you do go, try to get a packaged tour.  You tend to get free stuff and you don’t have to worry about driving when you are tired. 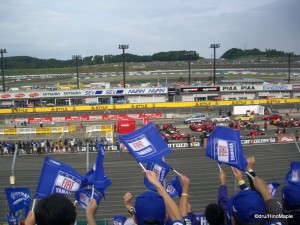 I took the Yamaha fan tour.  I was picked up at the train station, taken to the event, and got free swag when I entered the race area.  Last year’s package was very similar.  This year, I got a cap, T-shirt, scarf, and bag.  The bag was mainly to carry everything.  I also picked up a few other things.  If you ever go to an F1 race, the amount of goods available are greater, but not as nice (I think) as the Moto GP goods.  Unfortunately, the good things were sold very quickly and I couldn’t buy some things.  On the way back, we were greeted with more free things.  We got a free sticker to celebrate Valentino Rossi’s World Championship, and a free photo book highlighting the 2007 Yamaha Motor GP Season.  Unfortunately, it isn’t the year I’d like to have, but the pictures were amazing.  I’d say they didn’t make much of a profit, if any, with the tickets they sold. The Grand Prix of Japan is a very well oiled machine.  Everything runs very smoothly.  All of the vendors stay the same, yet provide new things every year.  Every year, I want to buy more and more things.  I just can’t stop myself.  I’m sure I’ll buy even more next year.  🙂 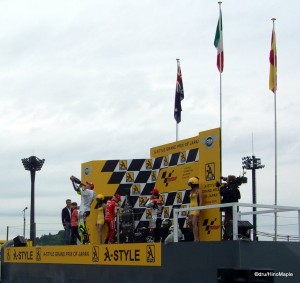 World Champion and winner of the Japan Grand Prix

As for the race, the 125cc race was the most exciting.  The opening lap saw 3 accidents.  Two being in the last corner.  The 250cc race saw only one accident, but the rest was exciting racing.  Lots of lead changes in the beginning and a young Italian won the race.  The Moto GP class was the most exciting.  It was the first chance Valentino Rossi had to win his first championship in 3 years.  The opening of the race saw Australian Casey Stoner take the lead with Rossi falling back.  He always tends to do that.  Later on, he overtook Stoner and eventually won the race.  After the race, I ran down to the track to help celebrate Rossi’s victory and Championship victory.  The closest I could get was about 20 metres.  Needless to say, it was a very exciting and lively time.  The most fun I had in years.  If you are ever in Japan during the Moto GP, please try to go.  The whole event is an experience that shouldn’t be missed.  One small exception.  I’m a big motorcycle racing fan, so I believe I’m extremely biased.  😉

2008 A-Style Grand Prix of Japan is part of a series of posts recounting my trips to Twin Ring Motegi and the Japanese round of the Moto GP series.  To read my other posts about this race please follow the links below: