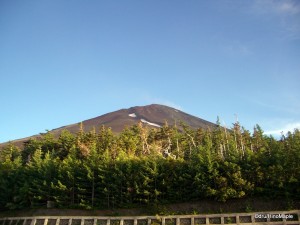 On Wednesday, July 23, I went to Fuji-san. Not to see it, but to climb it. Most people would say I’m stupid, but as the saying goes, you’re only stupid if you do it more than once.  Just give it time. 🙂

The day started early with the 7:45am bus from Shinjuku to Kawaguchiko 5th Station. It was the first bus we could take, and the fastest way there.  It is also really cheap. When we got to the 5th station, there were a lot of people. Most of them were just coming down from Mt. Fuji.  I’m guessing they spent the night, watched the sunrise, and then waited for the post office to open at 8am to send their postcards home.  We wandered around a little and I picked up a walking stick.  1000 Yen, but they burn “stamps” into it as you climb.  My friend also bought an oxygen bottle, but we didn’t touch it. 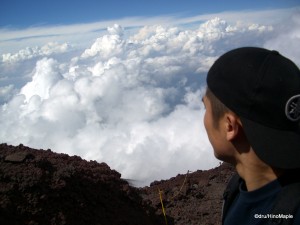 Enjoying the scenery from Mt. Fuji

After asking a few people for directions, we began our ascent. There isn’t too much to say about this. Generally, there are signs the entire way up showing you how to get to the top, and how to get back down.  There were also a lot of schools hiking up to the 7th station. Going to the top took us around 4 to 4.5 hours.  I didn’t really check the time.  We also stopped a lot to catch our breath, get our walking sticks stamped, and to take pictures of course.  There are roughly 3-4 sections of the climb.  The first is relatively easy. A nice slope with lots of rocks.  After the 7th station, it’s very rocky and steep.  You feel like you are climbing up, not walking up.  It’s similar to climbing the Chief (in Squamish, Canada) except the rocks aren’t smooth, rather they are jagged. At the 8th station, it turns into a nice walk again.  Note that a nice walk up Mt. Fuji and a nice walk around the house are completely different.  The very top saw us climing up like the 7th station.  The only difference is that the rocks weren’t as jagged as the 7-8th station section.  At the top, you are greeted by a torii (gate) and 2 lions/lion-dogs.  You walk around a bit, check out the crater, and then head down. Circumnavigating the crater takes about an hour, but we didn’t have time.

Resting on the way down Mt. Fuji

The trip down was fun.  We beat the 2 hour “expected” minimum time.  Then again, we were almost running down the mountain.  Our bus left at 6:25, it was 4, and they said it should take about 3 hours to get down… ….  We got down in about 1.5 hours.  Going down is fun and a pain.  The rock path isn’t too steep, but it’s very loose and rocky.  The top has a lot of soft rocks, and it’s easy to slide down.  As we descended, the rocks got bigger.  It became harder to “slide” down the mountain. Some areas had lots of lava rocks that were just a pain to walk down.  Other sections had big rocks that I kicked.  Yes, I probably hurt my feet. 🙂  Things don’t get easy until you are close to the 6th station.  From there, you are on the same path as the path that goes up the mountain, so the path is easy to walk… relatively speaking.  You are also probably very tired after climbing Mt. Fuji.

In the end, you are left at the 5th station, thinking about how to get home, and starving as food at the top costs an arm and a leg.  However, you also feel elated because you accomplished something that few people do, or even think of doing.

So, if you are crazy enough to think of climbing Mt. Fuji, here is what you should bring:

Clothes: Bring some warm clothes, but I didn’t feel cold at all.  Only at the summit.  Other people felt cold and needed a fleece.  Staying overnight will probably require warm clothes, and if it’s cloudy and windy, you’ll need warm clothes too.  We were lucky and it was mostly sunny and not too windy.  Sunglasses would be recommended but not necessary.  They would help a lot on the descent with all the dust you kick up.  A hat is a MUST.  Keeps the sun off your face and prevents a bad sunburn.

Shoes: Wearing good hiking shoes is great, but wearing old runners is fine too.  Just make sure they are expendable.  I can’t wear my shoes again.  I wore out the sole of the shoes running down the mountain.  Now I have to find new ones. 🙂  Then again, my shoes were pretty old.  Also, I saw someone walking up the mountain in Crocs, but he wasn’t doing the entire thing.  Just going between stations.

Lastly, check the weather before you go.  As long as it’s sunny, or no chance of rain, you’ll be fine.  The mountain is not humid, and very nice in the summer.