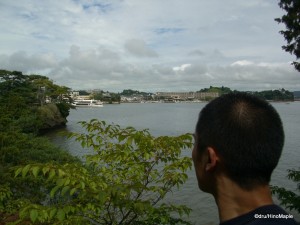 Enjoying the view of Matsushima Bay

On August 30, 2008, I went to Sendai and Matsushima to see one of the Top 3 Views of Japan.  The trip to Sendai is roughly 1.5 hours by Shinkansen.  If you are unlucky and can’t get the fastest train, it takes roughly 2 hours or so.  Beware that the JR East Shinkansen is fairly confusing the first time around.  You can easily take the wrong train if you aren’t careful.  However, it’s a lovely system with many destination points.  Getting to Matsushima from Sendai is also very easy, but be careful.  Trains tend to run twice an hour, so don’t go into the station too early or you’ll end up waiting 20-30 minutes like I did. 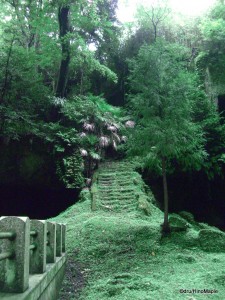 Matsushima is considered one of the Top 3 Views of Japan.  The bay contains hundreds of pine covered islands no bigger than a car.  It is not considered a top destination by most people, and probably shouldn’t be considered unless you have some extra time.  While the bay is considered one of the Top 3 Views, I was disappointed.  I must give one caveat, and that’s the fact that I didn’t go on a boat cruise of the islands.  I’d like to do that in the future someday to truly make a good decision, but as it stands, I can’t.  Visitng Matsushima requires about one day to see the major areas.  However, it can take two days to truly explore the area.  First, I headed out to Oshima.  This is a very small island that is probably skipped by most tourists.  I recommend it for the quiet atmosphere and the wonderful caves.  The caves themselves are amazing.  There are so many of them.  To be honest, the caves are more or less like an enclave.  Simple holes dug into the rocks.  Most of the Buddhist images inside them have deteriorated, but the area itself is still nice.  Up next, I headed to Godaido.  It’s a nice small island with a hall in the middle.  It’s a popular place for people to look around, but I found it to be less inspiring than a place to look at.  The last place I went to was Fukujima.  It’s connected by a long pedestrian bridge.  There is a toll to pay, but it’s worth it.  The island itself is small and easy to walk around within an hour.  Beware that the path starts off paved, but turns into a grassy mess.  Instead of having a nice hard path (which is buried), they covered the path in a spongy type grass.  Since the day I went was just after a heavy rain, the grass was waterlogged and I got a little dirty.  However, if you are careful, you will stay clean.  Before leaving, I decided to check out the Aquarium.  It’s very small, and not really worth the admission (700 Yen), but if you have some extra time, it’s nice to go there.  If you have a fascination with penguins, you’ll enjoy it. 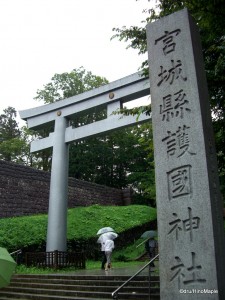 I returned to Sendai and took a small rest after I checked in.  I then braved the cool slightly rainy night to look for Gyu-tan.  Cow/beef tongue.  No, it isn’t an entire tongue.  It’s thin slices of cow tongue that has been grilled.  It’s  actually very delicious, if not, tough.  It took a while, but I finally decided on one shop that was about 15-20 minutes from my hotel.  It was a small little izakaya that wasn’t friendly for non-Japanese speakers.  I struggled with the menu, but did have a nice selection of food.  I’d highly recommend the place if I could remember the name.  The staff was also very friendly.  I returned to my hotel for a traditional beer (I seem to always have a beer back at my hotel whenever I travel in Japan) and went to bed.  For my second day, I decided to move my train time up a couple hours.  My original plan was to leave after 8pm, but it was a little too long to spend in Sendai.  To be honest, other than the food, there isn’t much to do.  It’s like any other medium/small sized city in Japan.  I took a quick ride on the Sendai Loop Bus and stopped at Sendai Castle.  I don’t recommend this unless you want a nice view of the city itself.  The bus ride is nice, and the view at the castle is nice, however, the castle is not a castle.  Rather, it’s ruins of the original castle.  The only interesting thing, aside from the view of the city, is the statue of Date Masamune and a nice walk in the park.  Other than that, it’s just eating.

So, any tips when travelling to Sendai/Matsushima?  If you have lots of time, it’s a nice place to visit.  If you have a free weekend, it’s nice to visit.  Can you live there?  To be honest, I think so.  However, I can imagine getting tired of the place very quickly.  While the train can be expensive, Sendai itself is a fairly cheap place.  Spend your money right, take your time, as always, and you’ll have fun.  Go in Winter and enjoy a lot of good skiing, or so I’ve been told.