Naoshima isn’t a large island but each area is somewhat spread out.  There are a few options for people who are visiting the island and only one option that costs nothing but requires energy.  The most popular way to get around the island is to rent a bicycle and go for a nice ride.  For people who can’t afford to spend the energy on a bicycle, you can always take the bus, and if you are staying at the Benesse House, you can take their own shuttle bus.  People who live in the area can always drive around the island but I find it to be a bit prohibitive because of the small lanes around Honmura and the restrictions to private vehicles in the Benesse Art Site area.  You are also capable of renting a scooter or, my personal favourite, walking.  Your own two feet are just as good as cycling and you can take a lot of photos along the way.

Cycling is one of the most popular ways of getting around the island.  There are a few shops that rent out bicycles to tourists and they cost 500 yen each for regular bicycles.  Electric bicycles are more expensive and only needed for those who are really not in shape.  Naoshima is not very hilly, but getting from one area to the other does require climbing a couple hills.  The best advantage to renting a bicycle is that you can get around the island easily and you can do it quickly.  I saw many people cycling but do be aware that bicycles can sell out, especially on weekends and holidays.  There are an ample number of bicycles but I would assume that they often sell out on these days.  The main problem with renting a bicycle is that you are at the mercy of the weather.  If it is windy, you have a greater chance of being blown off your bike, and if it is raining, you will get very wet.  Be aware that you are cycling through small neighbourhoods and good manners are always expected.  Don’t be a teenager screaming all over the island.  Try to keep an eye on traffic as there are cars that go through the back roads and be aware that the main street between Miyanoura and Honmura has lots of large trucks and cars that speed. 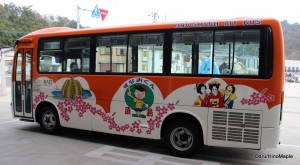 The bus is probably the best method of travel for an average person who isn’t really in shape.  The bus is not expensive, 100 yen per trip regardless of your destination.  My first time to Naoshima, I used the bus to get to Honmura, then again to the Benesse Art Site area.  I then took it to return to Miyanoura.  I think the bus is good, but be aware that the driver is unlikely to speak English.  Basic questions such as asking if he stops at one area are simple enough for them to answer.  Be aware that during the Triennale that it can be extremely busy to the point that it feels like you are there during the morning rush hour.  The main downside to the bus service is that the buses don’t run frequently.  They tend to run every hour or so when the Setouchi Triennale is not running, but during the Triennale seasons they do increase the services a little.  It is also important to note that the bus service is also timed to the arrival of various ferries.  If you are trying to get from the port to the other side of the island, you do have to go directly from the ferry to the bus.  It can be confusing the first time you go there but it gets easy quickly. 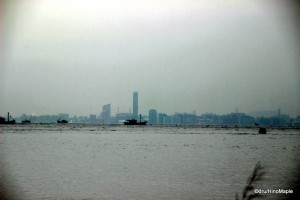 View of Takamatsu from Naoshima

My preferred method of travel during the entire Setouchi Triennale was by foot.  I had done a lot of walking leading up to my trip to Naoshima and decided that more walking was in the cards for me.  I walked from Miyanoura to the Chichu Museum, taking the southern route.  It was great as I could walk through the village at Miyanoura and the only other people there were the locals and cyclists.  The locals were friendly and the cyclists just whizzed past when I was in the town area.  I wasn’t alone when I was walking as there were about 2 other people walking the same path.  The southern route isn’t covered by the bus and the view from the coast allows you to see Takamatsu in the distance.  As I climbed the mountain/hill to get to the Chichu Museum, I couldn’t help but smile as I saw a lot of the cyclists give up and take a break.  I even saw a couple on scooters take a break too!  Of course they were probably just checking their map and taking photos but I’d like to believe that I had more energy than them.  In the end, cyclists are always faster but I loved the opportunities to just stop more often to smell the roses.  If I had a bicycle, I would have to park my bike, walk around an area then walk back.  I was really happy that I could just walk from A to B, most of the time, and not have to return to A to head to C.  I could head directly to C from B without backtracking to pick up my bike.  From Miyanoura to the Benesse Art Site, the Benesse Art Site to Honmura, and Honmura to Miyanoura, it is about 30 minutes on foot between each location.  Do note that I am taking a few liberties such as including a radius around the Benesse Art Site as it can take up to 30 minutes to walk from the Chichu Museum to the artworks to the Yayoi Kusama pumpkin on the other side of the Benesse Art Site, and then another 30 minutes to get to Honmura.  Other than that, it was not that far to go everywhere.  I did cheat a little by taking the bus from the pumpkin to Honmura as the timing worked out but otherwise I had walked around the entire island’s main sites. 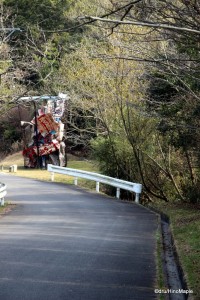 Big Trash Can on Naoshima

While you can drive around the island or rent scooters, I don’t recommend it.  It isn’t very practical if you ask me.  You end up spending more time putting things in and out of your vehicle and you don’t really get to enjoy the island.  While I haven’t actually tried it, it is what I observed.  If you are staying on the island, it is a convenient way to get to the island and to your place of stay, however do make sure you have a parking space available.  For those staying at the Bennese House, there is parking for guests but you’ll end up walking the rest of the time or taking the free shuttle provided for guests.  I will always be an advocate of walking as you can see a lot more. Unless you are out in the countryside trying to get from place to place, I don’t really recommend driving and while a bicycle is great, being a hobbyist photographer, I preferred to be on my feet so that I could enjoy taking lots of photos.  If I was on a bike, I wouldn’t have been able to do that, but that is just a personal preference.  Do what you like but taking your time to see things is the best way to get around the island.

Naoshima (Transportation) is also part of a series on Naoshima.  Follow the links below to read more.