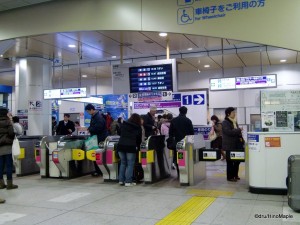 Arriving at Narita Airport can be a daunting challenge.  Not only will you probably be tired, if you don’t speak Japanese, it can be a small challenge to find out how to get into the city itself.  Unless you are rich, taxis are not an option.  There are three main routes into Tokyo.  The first is the Airport Limousine.  The second is to take a train, which has two options.  The simplest has to be the Airport Limousine.  When you exit the arrivals gate, you can usually find the Airport Limousine counter on the main floor.  There are several locations in both terminals.  It’s as simple as saying which hotel you want to go to, or what station.  The Airport Limousine goes to many destinations throughout Tokyo and Yokohama.  It’s also the most convenient way to get to Haneda Airport.  Do note that due to traffic, all times are estimates.  You can be severely delayed if traffic is horrible. 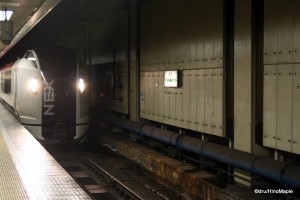 The safest way to get into the city is to use one of two rail companies.  The most popular for tourists is to use the JR Lines.  Using the regular lines is not popular for JR.  It is expensive and slow.  You will more than likely have to change trains at least once, maybe up to three times depending on your destination.  The easiest route is to take the Narita Express.  In fact, they have recently released a new train that makes things more comfortable.  They offer secure locks for your luggage and plugs for your laptop in each row.  Unfortunately, these are not available at all times.  The main advantage of the Narita Express is the number of destinations.  You can go as far as Ofuna, Takao, and Omiya without getting out.  However, most trains will only run from Narita Airport to Yokohama or Ikebukuro.  These trains usually de-couple at Tokyo Station.  Don’t be too afraid of connecting trains if you are headed to Ikebukuro.  If the train only goes to Shinjuku, it’s very simple to change platforms and get to Ikebukuro faster than if you wait.  The Narita Express doesn’t run too often, so it’s best to take the first one you can get, unless you have too many bags. 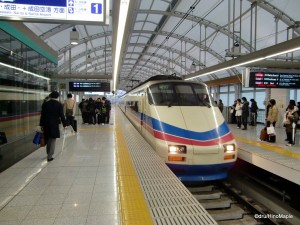 The cheapest route to Tokyo is to take the Keisei lines.  Their rapid service takes roughly 71 minutes to get to Tokyo, and their Skyliner service takes about 51 minutes.  The Rapid service costs roughly 1000 yen, which makes this a budget travellers dream.  If you want a good balance between cost and comfort, the Skyliner is one of your best bets.  The biggest problem with the Keisei service is choice.  You have your choice of Nippori and Ueno as destinations.  If you are headed to a hostel in Asakusa, this line is perfect.  If you are headed to Shinjuku, this route may not be your ideal choice, but it is a cheaper alternative at relatively the same time.  It’s just not as convenient.  However, as of July 2010, the service will be upgraded and the time will be cut by 15 minutes making this a more popular route in the near future.  The new service will be called the “Sky Access”.  It will feature brand new trains with a new local service being introduced as well.

Regarding what to take and how to get there, that’s your choice.  By far, the cheapest is the Keisei lines.  The most convenient would be the Airport Limousine, if they offer service to your hotel.  The Narita Express offers a very competitive service, but it is a little expensive overall.  In terms of locals, unless your company is paying for it, most people will take the Keisei lines.

Narita to Tokyo has been updated with Narita to Tokyo (Revisited).  To read more and get all of the details on how to get from Narita Airport to Central Tokyo as of 2012, please continue reading: